In Melbourne for an extended weekend, I only had about 36 hours to check out the Ballarat International Foto Biennale, but festival director Jeff Moorfoot and his team have done an excellent job once again. The last time I visited the festival was in 2007 prior to the rebranding and when it was still based in  Daylesford. It was great then, but I think the decision to relocate shortly thereafter was a good one. With limited time I was easily able to walk to most of the venues and check out the visual feast of photography. 21 core shows and 85 fringe exhibitions, that's a lot of photography.

The original draw-card for me was the 'Dolce Vita' by Jan and SarahSaudek from the Czech Republic. I was originally introduced to Jan's work whilst a student and loved the mix of rustic, sometimes unsettling, erotically charged content with his superb printing and hand coloring technique. Jan is an at times controversial photographer and controversy followed him to Ballarat where one of his images, 'Black Sheep & White Crow' (shown below) was removed after a complaint.


According to an article in the Sydney Morning Herald, "...a woman went to the Office of the Child Safety Commissioner, Tourism Victoria and the local council to complain that the 1995 Saudek work, Black Sheep & White Crow, which she had seen in an ad promoting the exhibition in Art Almanac, depicted a mother prostituting her child..."
WTF??? She saw the photograph in an advertisement for the exhibition and is suddenly an expert on its circumstances and the photographer's intent??? Hmmm, shades of self righteous, uninformed idiotic bullshit that surfaced with the Bill Henson controversy all over again.

Unfortunately, but quite rightly IMO, Jeff made the decision to pull the pic so as not to threaten funding for future festivals. But, controversy not withstanding, the show featuring work by Jan and his wife, Sarah (a very talented photographer who has also appeared as model in many of his photographs) was excellent and this exhibition in itself would have made my trip worthwhile.

Also showing at the Mining Exchange is "Momentum of The River's Flow: An Australian's View of Vietnam's Long Journey" by Les Horvat. As a former soldier with an interest in the conflict in Vietnam I enjoyed looking at Horvat's take on that country, particularly his images from the area in Phuoc Thuy province where the Australian Task Force was deployed during the war... Nui Dat, Long Tan, Binh Ba and Vung Tau. Manipulation, not the least through the use of HDR and colour saturation, is evident in his landscapes but as a regular visitor to Vietnam they resonated with me and captured the mood, both real and imagined. 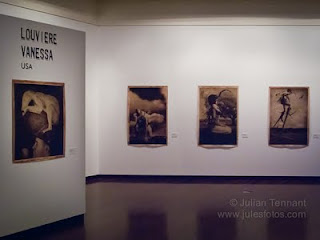 A short two minute walk away, at the Art Gallery of Ballarat was another standout show for me. 'As If...' ('Creatures' and 'Chloroform') by New Orleans based photographers Jeff Louviere and Vanessa S. Brown incorporate all the nuances of photography, film and printmaking to present subjects that are beautiful but not pretty. Their large prints on Japanese Gampi paper and combine photos with blood and wax are simply stunning. Dark, surrealistic and moody... the kind of stuff I like. You really must check out their website too. 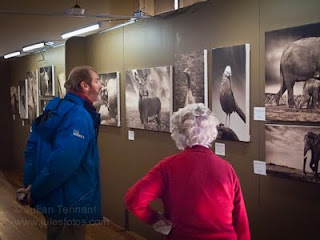 As usual with these festivals, the fringe component presented an eclectic range of exhibitions of varying quality and content. I know from my own involvement in the organising committee with the FotoFreo festival that the fringe can attract negative reactions re scope, content and quality. But I think that the 'experts' that level these criticisms miss the point of what a fringe festival is. Apart from providing an opportunity for photographers who for whatever reason do not fall under the umbrella for the core program, it opens the door to participation and 'ownership' of the festival by the community. That 'ownership' leads to an active involvement.

For a volunteer run festival that should not be forgotten and it was definitely at the back of my mind when along with my small team, I developed the model for FotoFreo's 2008 fringe festival. Many of the fringe exhibitors in the FotoFreo festivals of 2008 and 2010 also came aboard as volunteers to make the festival happen and without that unpaid volunteer base, you can have all the lofty ideas for curation and content in the world, but without a shitload of cash, not a hope in hell of making it happen. I think that the BIFB crew have got the mix just right, there is certainly a lot of interesting and very inspiring work in this fringe.
The only downside for me was one of my own making... I purposely stayed in Ballarat overnight to attend the opening, but somehow late on Saturday afternoon after catching up with an old friend things became a bit hazy. Much hilarity, fear and loathing... but there was no way I was in any state to go to the festival launch... but that is another story.
BIBF runs from the 20th of August until the 18th of September. More details can be found at their website. http://www.ballaratfoto.org