Killing time with Goya and Levinthal 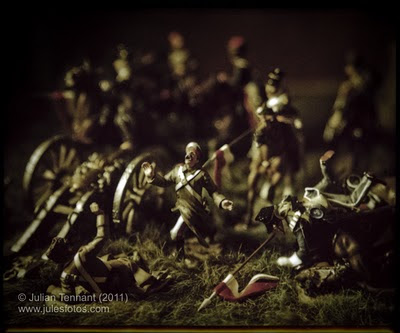 
I took this Polaroid earlier in the week. The end result of procrastination and my usual attempts to avoid doing any meaningful work. I should have been doing prep for my classes at TAFE, but as usual I became distracted. At least it wasn't porn this time. I was looking at some of Francisco Goya's  Disasters of War and Otto Dix's Der Krieg prints. Disturbing stuff ... powerful images that convey to me, the same level of horror, pitiful waste and sadness as much of the hardcore war photography that came out of the latter half of the twentieth century.
And as I meandered through the net looking at pix and thinking about stuff I rediscovered David Levinthal, a photographer whose style has been defined through his use of elaborate miniature sets to explore concepts and ideas. Probably best known for his Hitler Moves East series, I found his Mein Kampf body of work to be quite powerful in how it caused me to respond to what are essentially pictures of toys. He uses models paying careful attention to light, composition and depth of field control to create  scenes of drama, tension and narrative. In his photographs, the harmless children’s toys’ that society uses to socialise it’s young take on much darker connotations as he addresses issues in his personal life and the world around him.
Inspired by his work and with the prints of Goya and Dix fresh in my head, I dragged out my beloved Minolta Spectra Pro which still has one of my last remaining (and long expired) packs of Polaroid film sitting in it's belly. The figures are some models that I have from the Hong Kong based company King & Country, not quite relics of my childhood and... well, this is my feeble attempt anyway.