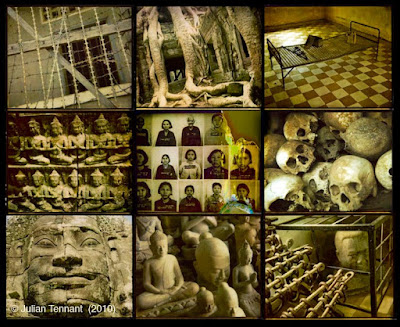 The Khmer Legacy - Polaroid Spectra instant prints
(click on image to see a larger view)
A small body of work that I shot in Cambodia with my Minolta Pro camera which uses the, now defunct, Polaroid Spectra film. I really like the imperfections and color casts that Polaroid Spectra produced. Generally I prefered using it for night shots but for some reason the film I was using when I was at Angkor (and then in Phnom Penh) had a bit of a green cast. Probably due to it being expired and  then fried at several airport x-ray machines.


These images were all taken either at Angkor, home of the mighty Khmer empire , which at its peak stretched across Laos, Thailand, Burma, Southern Vietnam and Malaysia. Others were taken in the notorious Khmer Rouge interrogation centre housed in what was once Tuol Sleng Prey High School, but is better known as S-21. Of the between 17 000 to 20 000 suspects that went into S-21 between 1975 and 1979, only a dozen are known to have survived.
Posted by Jules